skip to main | skip to sidebar

Cable To Hang Yourself With 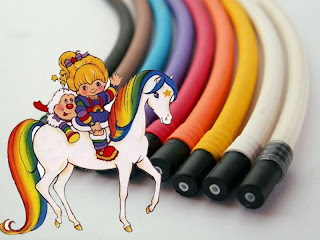 If the €250 price isn't enough to make you drop a casaba melon sized turd, perhaps the convoluted sizing protocol of the Vertebrae cable system will help release those b-flaps.
I've experienced the results of a few compressionless setups and, while marginally superior to the old housings I've used, they're frankly not that big of a deal. Nor do they "blow away" the standard quality cable and housing setups (unless it's that Giant OEM shit) as some forum writers might lead you to believe, so long as they're properly cut and routed.
I'd be willing to pony up for the Yokozuna Reaction kit, seeing as how I used to spend a day's pay on the Campagnolo cable and housing ropes back in the day. But, €250? Someone get me a diaper.

Edit- If anyone has real world experience with these let me know in the comments page. I've yet to use them and still remain skeptical, but I'm open to any feedback you may have. Positive or negative.

I also must admit that I flagrantly disregarded the cardinal rule of bike shops: Don't bitch about the price. If there's one thing that made me go Mr. Hyde, it was those goddamn price whiners. And now, to be one of them, it hurts. It hurts real bad.
Posted by strangelife at 4:13 PM

The owner of the company here.

Aluminium oxide ceramic isn't a cheap material to make parts out of because each part has to be moulded and fired separately.

If you're looking for THE BEST, this is it. I never claimed they were cheap.

It's funny how people used to think Chris King headsets were over-priced, until they realised that they could easily last more than 10 years... in that sense they can be well worth it, at least for your best bike.

Vertebrae cable housing offers superior performance which you can then take from bike to bike. It's also custom made - discounts will soon be available to those that wish to assemble their own from scratch.

Thanks for listening-
Les.

Thanks for the comment. I realize that, as bike parts go, there are a wide variety of performance levels people are willing to pony up for. Cables and wee bits included.

As yet, I've not used your cables. They may well be "THE BEST". However, at their current price, and with more than adequate performance from much cheaper competition, I don't think I ever will. That's not to say they aren't worth it for anybody else. It's just one opinionated curmudgeon's opinion.

They look fantastic, and you obviously believe in your product, so I've no reason to doubt your sincerity about performance.

I'll keep an eye out for those discounts. And, if a somewhat (under $200 US even?) affordable price comes along while still allowing you a fair profit, I'll bite and happily write about the crow I will have ate.

I don't know what to say. Perhaps I've finally seen everything. Well, at least they're available in brown.

It's not just cables that are priced in the stratosphere. Think about the $8k frames, $4k electronic groups, $3k wheels, etc. Why has this price inflation occured???

strangelife
An industry lifer dedicated to remembering the past, ridiculing the present, and embracing the future.